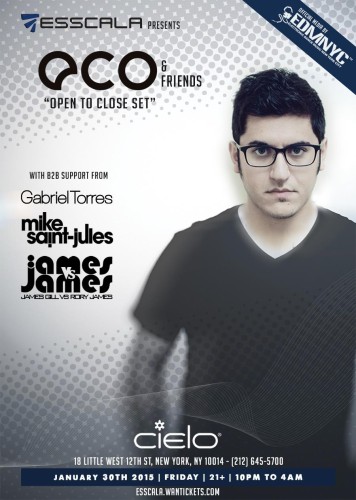 When people ask me about the New York City trance scene, I immediately think of intimate yet defunct clubs like Sullivan Room, National Underground and The Morgan, the exposed brick walls that became home to some of my favorite nights of music. The DJs on these nights did more than just play music, they became your friends. Entry was cheap, if not free, and the music was the main focus. It was at one of these shows that I first saw Eco, with a late-night set that pulled me closer to the stage while my tired brain fought to head towards the door.

Now, with the scene bigger than ever, those same DJs that became friends have grown to fill proper clubs like Cielo, with the sound systems and crowds that they deserve. Eco returns to New York City with a special open to close set featuring local friends Gabriel Torres, Mike Saint Jules, and James vs. James (James Gill and Rory James). His newest track, ‘Liberation’ features vocalist Brooke Forman in an ethereal masterpiece of melodic, uplifting trance. As we anxiously await the release of his new album, “Wolves” we can only hope for musical teasers throughout his Open to Close set on January 30th. And what better support than the DJs that were beside him before his success, all now successful in their own ways. For the NYC trance family, who have followed all if not most of these producers on their musical journey throughout the years, this is sure to be an extra special night of music. For newcomers to the scene, prepare for a special glimpse into the history (and future) of New York City trance!

Lowland – We’ve Been Here Before